And there we have it, Locke(d) is complete!

This idea has been sitting in the back of my head since reading a certain passage from John Locke, so when I heard the theme of the next My First Game Jam was "locked", I just couldn't resist. Those who are interested in the passage will find it further below, but for now I'll skip the philosophy stuff.

Followers who are familiar with my other projects might get the impression that this one is a bit different. That was intentional, since the main goal of My First Game Jam is doing something new.

Initially, I wanted to use these two weeks to learn how to use Live2D, but since my files were way too big for the trial version, I quickly abandoned that idea. Rather than learning a new program, I decided to break out of my creative comfort zone.

I tend to rely on big casts with various fun personalities, so this time I went for a small cast of two characters that don't have much of an interesting dynamic. Putting it like that makes it sound like intentionally wanted to create a boring game – which is not the case. Just this time, the focus of the story isn't on character relationships. The dialogue this time around won't make you smirk, but I still hope you'll find it interesting!

Additionally, I wanted to try some new things art-wise. While I really love designing characters, I don't enjoy carefully drawing them. That's why, this time around, I tortured myself by polishing the sprite a lot more than I usually would. It was also the first time I made a full-body sprite. Here's some top-secret concept art: 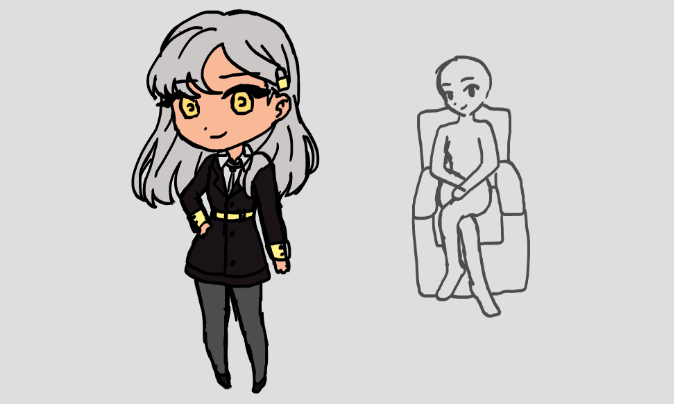 My third goal was the scrolling point-and-click room. Coding it was way more of a headache than I expected it to be, but I'm glad I got it to work. I initially only did it because I didn't feel like designing a choice menu. Turns out designing a choice menu would've taken at most thirty minutes, while the room took [redacted] hours, so I probably got what I deserved for trying to cut corners.

Admittedly the biggest hurdle was that I had a final exam 5 days before the deadline, so that definitely added a bit of excitement. Fortunately, the exam went well and I managed to conjure up a finished product, so all in all I'd say this was a huge success.

Last but not least, big thanks to Darius Gourdine for the beautiful music! He got the mood spot-on and was a pleasure to work with.

Locke(d) should only take around 20 minutes to play through, so I hope you'll give it a try and let me know what you think!

Anyone still around? And wants to hear about philosophy? This part is for those three people out there. I do recommend you play Locke(d) first, though, since this might take away part of the mystery for you.

The passage that inspired me was from John Locke's book An Essay Concerning Human Understanding (Book II, Chapter XXI-10):

"Again: suppose a man be carried, whilst fast asleep, into a room where is a person he longs to see and speak with; and be there locked fast in, beyond his power to get out: he awakes, and is glad to find himself in so desirable company, which he stays willingly in, i.e. prefers his stay to going away. I ask, is not this stay voluntary? I think nobody will doubt it: and yet, being locked fast in, it is evident he is not at liberty not to stay, he has not freedom to be gone. So that liberty is not an idea belonging to volition, or preferring; but to the person having the power of doing, or forbearing to do, according as the mind shall choose or direct. Our idea of liberty reaches as far as that power, and no farther. For wherever restraint comes to check that power, or compulsion takes away that indifferency of ability to act, or to forbear acting, there liberty, and our notion of it, presently ceases."

In general, I can recommend An Essay Concerning Human Understanding to anyone who is interested in philosophy. It covers a vast range of topics, and John Locke is a breeze to read compared to other philosophers of his time.

And that's it from me. Thank you for your support, as always!

What does it mean to be free?